I just recklessly retweeted this Jezebel article just now. It was tweeted by an awesome account that I follow called @STEMWomen.

Then I thought about it. On the surface, this is a win, a victory for women and girls, and maybe service providers in that area will think again when they try to offer a “boys only” class.

I mean, I can just hear the “other side” now, but what about all the “girls only” classes that are everywhere.

It’s kinda like this meme that has been doing its rounds: 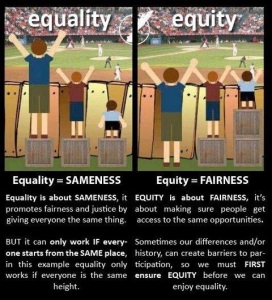 Yes, we can have girls only coding classes, and girls only robotics classes. Because we didn’t start off at the same place. When all the little girls, from when they were babies, were told to play with dolls and boy were given transformers, then, yes, the little girl is not going to consider the robotics class, and they are sure as heck not wanting to go to one full of boys that think they know it all already! (I know this intimately, as I am a parent to a boy who thinks he knows it all already)

Which brings me to my actual musing about the article.

This particular case was a win for that little girl. It is also, incidentally, a win for all the girls in that area who were too afraid to speak out.

What happens everywhere else?

Service Providers need to do a bit better. If they are wanting to do a gender segregated classes, fine, do two of them. I think we are doing quite a lot better here in NZ, hopefully more stories like this will start to surface.

View all posts by vivster81

This site uses Akismet to reduce spam. Learn how your comment data is processed.