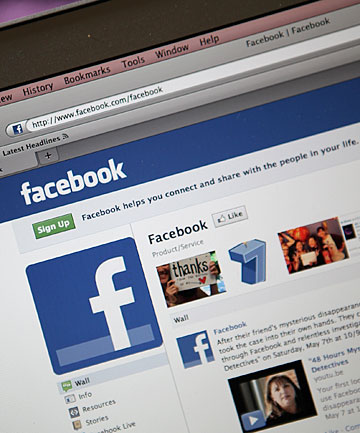 Up to half of children aged 10 to 12 are using Facebook, even though the social networking site is supposedly restricted to those 13 and older.

“Anecdotal evidence from our conversations with parents and teachers suggests that there are a lot of children under 13 who have a Facebook page,” said John Fenaughty of New Zealand internet cyber-safety organisation NetSafe.

Last year’s annual Auckland University schools census, which collects data from more than 20,000 students, shows about 60 per cent of 12-year-olds, 40 per cent of 11-year-olds and about a quarter of 10-year-olds with a Facebook page.

The latest figures from market survey agency Nielsen show the sites visited most by 10 to 19-year-olds are Facebook, Google, YouTube and Trade Me, in that order.

Fenaughty said it was difficult for parents to weigh up the benefits of enforcing Facebook’s 13-plus rule against the positives of being online. “On the one hand it’s important to model to your kids that following the rules is important. On the other hand, more and more people are using Facebook and it’s natural that your kids will want to be there too.”

He suggested sharing pages with children since parents could control them, but the child had the benefits of prize draws and competitions on social networking sites.

“That means you can educate your child about safe and respectful use while they are still young enough to listen to you, so you prepare them for when they have their own accounts.”

Parents’ concerns about online predators were valid, Fenaughty said, but cyber-bullying was a bigger issue.

Open communication rather than the threat of cutting off access was the best approach.

“While it’s important your kids talk to you before meeting a total stranger, it’s vital they know if something bad happens to them online that parents won’t cut them off.

“If they think you’ll do that, you risk driving their internet or phone use underground, and losing the opportunity to help them when something bad happens in the future.”

IT manager and mother to 4-year-old Dylan, Vivian Chandra, worked on a school’s cyber-safety strategy and was astonished at what children could access. “Now as a mother of a preschooler I’m really surprised at what kids can pick up. I’ve seen Dylan surf around and find videos on YouTube when he can’t even read.

“It’s not a question of technology, it’s the same with cigarettes and alcohol, the more you keep kids away from it, the more they think it’s really cool,” she said.

Chandra thought 10 was an appropriate age to let Dylan use social networks, but said she would make a decision based on his maturity level, rather than his age.

“I don’t want to set an arbitrary age, I’m quite involved with him so I will know when he is mature enough to understand the concepts behind it.

“It’s not about technology, it’s when he is ready to interact on a global level with strangers.”

And parents are being warned against thinking they know more than their children.

Although almost 70 per cent of participants in a Sunday Star-Times readers poll said they had better knowledge of the online environment than their children, an AVG digital maturity survey showed Kiwi 6-year-olds had a better grasp of technology than many adults.

The survey also found more children could play a computer game than could ride a bike, and that 6 to 9-year-olds spent 3.5 hours a week online.